“It was about the feminist, queer, leftist idea of solidarity, where we would also welcome straight people and those who were not enthusiastic about or even traumatized by sport systems“

In the next in our series of articles as part of this year’s LGBT History Month, Remmy Fillip interviews queer sports artivist, qSPORT coinstigator, and long time collaborator with LEAP Sports, Z.Blace.

(photo above from Conference: ‘Contesting/Contexting SPORT’ in Split, Croatia 2012)

Tell us a bit about yourself and your activism story

I come from a complex background of the post-war post-transition context of the former Socialist Federative Republic of Yugoslavia. I am living mostly in what is now Bosnia and Herzegovina, Croatia and working across the EU (most often Belgium and Germany). I’m likely the least competitive sports person in my family and have been trained as a media artist and educator. I got engaged deeply in media activism and later queer activism after being attacked by skinheads at first Zagreb Pride. As of recently I am also involved in knowledge activism, education and research related to Wikimedia, open content, data, free media and participatory methods of online work and commons related.

My work is mostly around critical and creative questioning of norms, especially those that oppress ‘minorities’. We are often pushed into a position of identifying as a minority because there is an assumed notion of mainstream normalcy, statistically often just the average, but outside of statistics this doesn’t really exist. We are often preassured into heteronormative, classist, ableist and what not norm. Everyone is part of some ‘minority’ and much is constructed. I try to point to this and inspire change by initiating (sometimes instigating) practises that are across art and activism, technology, media, sports…efforts to enable the underrepresented to surface.It often starts as an organising activity and evolves into a more discursive research and aesthetic work, materialising as an intervention, exhibition, a conference, a workshop or media production. I am still close to my original media arts practice, but it’s much more conceptual and situated ‘artivism’.

Tell me more about Queer Sport in Split and Zagreb. How did the organisation start, and what does it do?

As a follow up to my exposure to NY Team Aquatics and hearing about GayGames. As an activist, artist and former competitive multi-sport athlete I was proactive and coinstigated QueerSport in Croatia by finding few friends and forming a first queer volleyball team in 2005, the first one to represent the country in the EuroGames. It was super hard to work in stealth mode and still have queers locally imagine it is possible. We formed informal groups and later organisations in Zagreb and Split (with a team in Osijek and activities also elsewhere). Zagreb one was abbreviated to qSPORT, a cloaking name to have less visibility and tension, or to defuse it in a hostile environment back in 2006-2008, when we were biggest LGBT+/queer initiative in the region. For organising the 2012 annual general assembly of EGLSF* and the Contesting/Contexting SPORT conference in Split, a local QueerSportSplit organisation was also formally registered in 2011.

We did volleyball, recreational swimming, yoga and hiking, and more recently badminton, beach volleyball, dance and tried a few more. All people were welcome to join as we tried not to organise an exclusive gay or LGBT organisation. For me and few other organisers, it was about the feminist, queer, leftist idea of solidarity, where we would also welcome straight people and those who were not enthusiastic about or even traumatized by sport system. We also had many leisure and cultural activities as there was much interest in parties, exhibitions, cooking, knitting, which were the social glue. We worked with other arts and activist groups, doing parties, excursions, producing actions, installations, media and contributing to publications. In that sense, we were pioneering in what is now considered routine in LGBT sports in Western Europe, because we were in a much harder situation, working in a more homophobic, economically and socially-deprived environment. Some of our members cannot afford commercial recreation. Also we know that gender parity and equality for women in sports can happen, because we experienced it in socialism, where women were almost equally represented and paid. It was not perfect, but female athletes could earn a living by playing many sports, which is now economically impossible. Back then each factory and company had their own sports groups, so in that way we are not only looking to the West, but to our own history.

There are also totally new challenges, like how to address trans*, intersex, non-binary and body shaming issues, which have only surfaced in the past few years here, yet things are moving fast. Twenty and ten years ago, the first Prides in Zagreb and Split were attacked violently and this year both mayors showed up in support for the first time. City governments are finally moving towards a more sustainable and socially responsible governance. We changed and the context changed in a way that we can now deal with the mainstream and be in public, instead of being mostly in ‘stealth mode’. 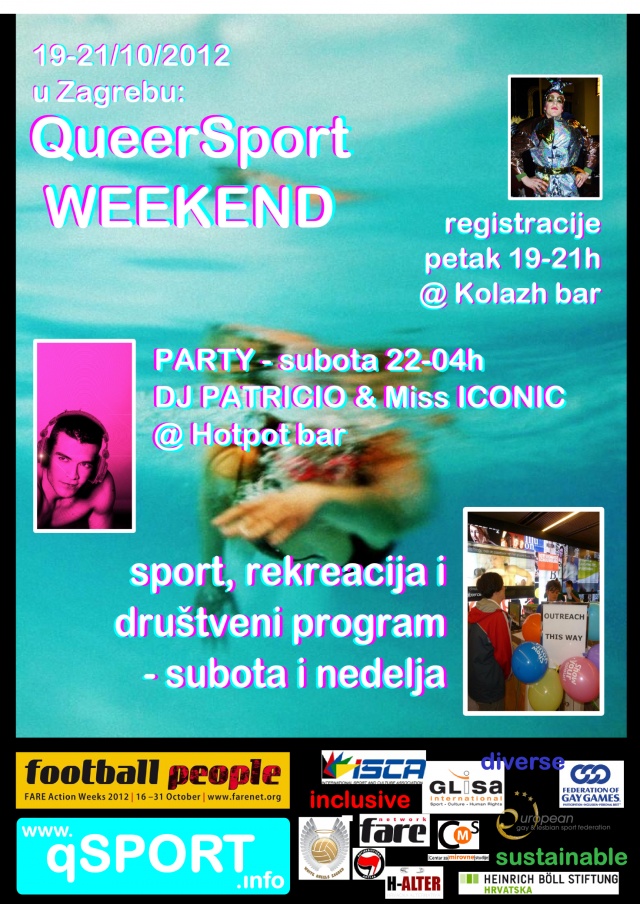 What are the main challenges of this kind of activism today in Croatia, and why is it important?

For us it was important to establish what did not exist before, that we actually innovate rather than just copy or follow others. We networked with other similar organisations in Western Europe, but most of them dealt with these topics twenty or thirty years ago, so the challenge was finding those more in sync with us, or those who were addressing queer and feminist issues. We didn’t have very many members, maybe 200 altogether cumulatively, but we should consider that the Pride movement started from 10 people. We first worked with people who were not ready to come out (not even to other LGBTs), and still empower them by establishing a safe space, one in which they didn’t have to become die-hard activists, but just to deal with acceptance. We also had issues that we couldn’t deal with so well – drop-offs from people who felt like we weren’t doing enough or didn’t feel safe enough, so we always try to do better and sometimes push the limits of organising.

What is the importance of European collaboration, and more specifically the one with LEAP Sports?

Very few of us from the region were connected to the international LGBT circuit around 2005-2006, and often felt like outsiders. We met LEAP Sports in 2008 or 2009, like us outsiders, but someone who has access to resources and is willing to question all routine work. Before this, most meetings were boring and administrative, just discussing policies. The first time we heard about LEAP Sports was through a video production they did, a personal narrative of coming out in sport, and that for me as a media creator was automatically a moment of synchronicity – recognizing there are others thinking that it’s not enough to do sports, but actually take agency for promoting this transformative potential that can inspire people. As we had the opportunity to work in parallel and we realised there were common interests in questioning norms. We were talking about how we should organise around feminist and queer practices that go beyond what is already established in gay sports organising, and go deeper in research, education, and media outreach, for new projects to upgrade the existing mode of work. LEAP was kind enough to share their resources – Hugh organised a workshop where seven or eight countries came together. This was a turning point, getting training on how to access European funding and getting a sense of each other and who was passionate about what. This gave birth to multiple projects, with each of us having slightly different, but compatible agendas. It gave us a chance to do things that each of us individually could not do. This is something that may not be essential to London or Amsterdam, but to Glasgow, Zagreb and Ljubljana, it is. 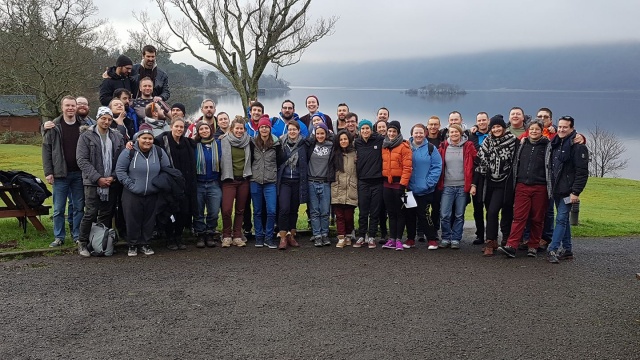 The theme for LGBT History Month 2022 is Blurring Borders: A World in Motion, and throughout the month, we are looking at dimensions of LGBTIQ+ sport beyond physical activity and sport itself.

With special thanks to Remmy Fillip who conducted and wrote this interview. Remmy is a freelance writer and translator based in Edinburgh. She is a contributor for the LGBTQ+ magazine Somewhere: For Us

Z. Blace works across the art/cultural and social/political axis in collaborative projects. As of 2005 ze worked actively on QueerSport and co-founded qSPORT Zagreb, a society for queer sport and recreation, in 2012 co-organized a seminal conference in South East Europe with EGLSG and Council of Europe http://split-2012.qSPORT.info. Ze co-initiated the sport-culture-activism connective ccSPORT in Berlin in 2016 and in 2018-2019 led Erasmus+ project BEYOND BINARIES examining the spectrum of Masculinity-Femininity / Hetero-Homo normativity in Aquatic sports and Dance, with 6 EU NGOs from the field of LGBTIQ+ sport (including LEAP Sports Scotland).