​Pride Youth Games: The Ramblings of an Excited Youth Worker 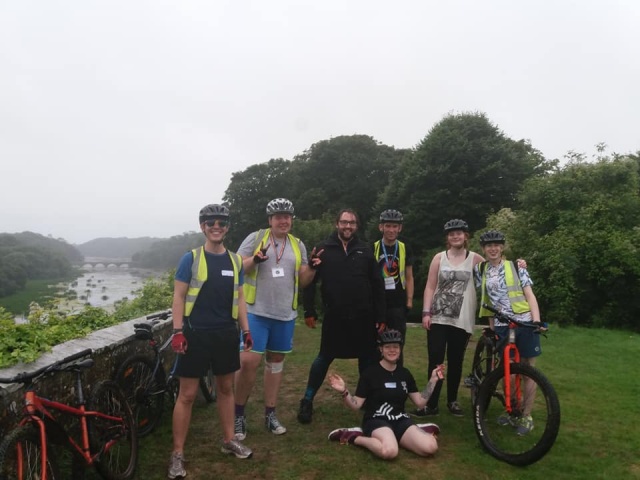 Pride Youth Games holds a very special place in my heart. It was my first introduction to LEAP Sports volunteering and has given me so much fun over the years.

When we first went into lockdown all those months ago, one of the things I was looking forward to post-lockdown was getting to Largs and getting to my third Pride Youth Games. Unfortunately, we all know what has happened and this won’t be this year.

I want to take you back to August 2018. Arriving bright and early to get on a coach with some excited young people and even more excited – caffeine fuelled – youth workers. We began the 13-hour bus ride to South Wales! I didn’t know at that point what was to be expected of the weekend, but I knew it was going to be fun, at that point I was finishing up my master’s dissertation, so any excuse to get away from the computer and be outdoors. We got to Wales, got sorted into our rooms and came out for dinner and evening activities. It was really fun, good to see for the first-time groups from all over the country coming together like this. I’m trying to remember specifics of this games, but what I can remember is the mountain biking, the yoga and the water sports. I hadn’t been on a bike for years before these games. I had been scared and just got out the way of doing it. I decided to conquer one of my fears and give it a go. Some of the young people signed up for that session were the same, so I feel like we helped support each other. The mountain biking was AMAZING. The route was gorgeous, and I felt so exhilarated. We were going down a narrow-ish path with a sharp left turn and I took the turn too quickly and pulled on my break and flipped over the handlebars. Landing in the soft, soft thorn bush. I was at the back of the group and a young person was ahead of me and zoomed up to the rest of the group and got our instructor to come back and give me a hand. I was a bit shook up, but I got back on my bike and cycled for most of the rest of the way. Since then I have cycled a lot more and I think falling off and surviving and getting back on was one of the best things that could have happened to me.

Later that day we were doing to go paddle boarding and I ended up sitting out that one because I was starting to get sore from my fall earlier. However, my biggest memory of this activity is seeing the young people overcome their fears, try new things and succeed in doing so! They were amazing. None of them had done anything like that before, but they gave it a go and they were outstanding. The next day we tried some yoga, and this was my introduction to something that would become part of my self-care routine. As an introduction to PYG, Wales was outstanding, and I already couldn’t wait for 2019.

Fast forward to August 2019 and we were getting set to go to Manchester. I knew what was ahead of us and was super excited to see what sports we had on offer! I got up, jumped on a train to Edinburgh and organised folk on the coach and we were off! Shorter journey this time – which was well received by all – and we arrived in Manchester in no time!

Manchester 2019 was one of the best weekends of my life. It was just amazing from start to finish. The opening activities were really fun, I don’t remember much about them, but I just remember seeing everyone happily bouncing around the large hall and mixing with different groups and different people from across the country. That weekend I tried lots of new things, and I think I enjoyed myself more than some of the young people. I signed up for archery (see boomerang on the social media post, in which I am so happy to have hit the target, and I had a ‘friendly’ competition with one of the other youth workers), touch rugby – which was honestly fantastic – voguing – which came at the end of the day and I was glad for the extended time on the floor. kickboxing which was really fun and so impressive to see the group who were leading us – KORFBALL, which was honestly a revelation and amazing and I LOVED IT. I remember being on the Korfball court for approximately 30 seconds and turning to Hugh and Lou and shouting, ‘THIS IS MY FAVE SPORT, LETS SET UP A TEAM’. I was absolutely on a high, both with the variety of sport being able to do and by seeing the young people take to things as well as they did. My favourite part of Manchester 2019 was going to the velodrome and doing lots of different cycling activities. We were split into groups and I was with the group who either couldn’t or weren’t confident in cycling. We enjoyed the standing bikes – can’t remember what they were called. Then we skipped going into the velodrome and went straight to the outdoor mountain bike course. The young people were a bit nervous of going on this, so some just went around the park and practised skill and built confidence. This meant that I was able to spend a long time on the mountain bike course myself – which I loved. It was a lot of fun and the instructors were amazing. I remember at the end of my session on it, Lou came up and got a video of me coming into shot and I again was so excited and so happy.

Pride youth games is an amazing weekend and I am so gutted it isn’t on this year. But I know that next year it will come back bigger and better! I really urge anyone who hasn’t been before but is able to to sign up and to come along and have the best weekend of your year! PYG has got me back into sport and got me trying new things, if I was able to be a part of something like this when I was younger I would have got into sport again a lot sooner and felt a lot better about myself.

Thanks for reading about my ramblings about PYG, and I look forward to next year SO MUCH!