What's the fuss about Truss? 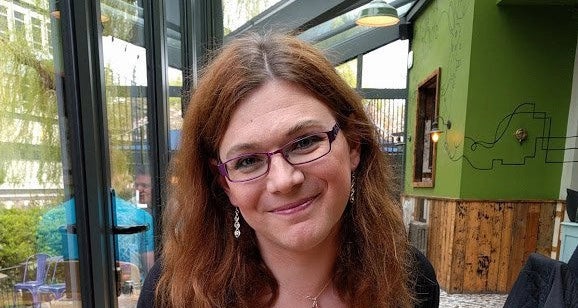 Charlotte McCarroll explains the fuss around the comments by Women and Equalities Minister Liz Truss and why we should be concerned.

The latest comments from the current Women and Equalities Minister, Liz Truss, regarding the consultation on reforms to the Gender Recognition Act come of great concern to trans people such as myself.

A little bit of background for those not in the know. Prior to the Gender Recognition Act passed by the UK Parliament in 2004 there was no way for a trans person to change their legal gender. What was written on your birth certificate was what you were legally until the day you died regardless of how you felt, identified or lived your life. The Gender Recognition Act changed trans lives for the better. All documents could reflect who you were and how you lived your life. However, while the legislation was very forward thinking for the time it was written, it has quickly aged and has many problems. Firstly, there is the medicalisation of being trans. An individual wishing to change the gender on their birth certificate must have two independent doctors’ reports detailing a diagnosis of ‘gender dysphoria’. One of those reports must come from a recognised gender identity specialist. The World Health Organisation (WHO) has ceased categorising transgender identity as a mental illness so the need for doctors’ reports is outdated. Secondly, individuals require over two years’ worth of documentary evidence of their change in gender. The precise requirements are vague and leave many trans people worried that what they have provided is not enough. Thirdly, a fee of £140 is required. The fee can be waived based on means testing but is still a barrier to what amounts to be the fundamental human right to appropriate identity. Fourthly, the Gender Recognition Act does not make provision for under 18s. Finally, the Gender Recognition Act makes no provision for non-binary individuals. People must change from one absolute to another.

A further piece of important information regarding the Gender Recognition Act. Once approved, i.e. you have provided all documentary evidence, doctors’ reports, statutory declaration, proof of name change, justified whether you have had surgery (and given appropriate evidence as to why not if you haven’t) and paid your money, you then get a piece of paper called a Gender Recognition Certificate or GRC. This document is for one purpose and one purpose alone – to give to the registrar in order to issue a new “corrected” birth certificate. What a lot of people and organisations get wrong is that they are not entitled to ever see a GRC.

The final piece of background information you need to understand is that it is a different piece of legislation that governs how people treat minorities without discrimination legally. That piece of legislation is the Equality Act 2010. Under that act there are defined nine protected characteristics of which gender reassignment is one. With regard to transgender people, the wording is: “A person has the protected characteristic of gender reassignment if the person is proposing to undergo, is undergoing or has undergone a process (or part of a process) for the purpose of reassigning the person’s sex by changing physiological or other attributes of sex.” Under the act are a couple of specific “sex-based” provisions such as sporting competition and occasionally certain occupations where a person’s birth sex is the overriding factor. However, “Such treatment by a provider has to be objectively justified”. Of course, one person’s “justification” can differ from another’s.

In 2018 the UK government had a consultation period open with the public to allow comments and suggestions regarding proposed changes to the Gender Recognition Act. Essentially to make the Act applicable for modern times and to bring it in line with legislation in other countries. The proposals were to remove requirements for doctors’ reports, lengthy documentary evidence, the fee and to make provision for 16-17 year-olds and for non-binary people. Unfortunately, this brought forth a large amount of quite vitriolic opposition and gave the proverbial floor to a vocal anti-trans lobby. The consultation ended and nothing was said until recently.

Liz Truss took over from Penny Mordaunt as Minister for Women and Equalities in September 2019. This was a controversial choice as Liz Truss has been shown to have anti-trans sympathies. Fears among trans people are that having a minister with anti-trans sympathies responsible for recommendations on changes (or not) to existing legislation is not only a conflict of interest but could serve to delay or jeopardise long overdue reforms.

The comments made by Liz Truss yesterday have confirmed the fears of many trans people, myself included. On the face of it some words have been said that appear supportive such as “making sure that transgender adults are free to live their lives as they wish without fear of persecution”. However, nothing else of what was said was supportive in the least.

I will explain why Liz Truss’ words are of concern. She outlined three points: “First of all, the protection of single-sex spaces, which is extremely important.” Now, the Equality Act 2010 uses the terms of sex and gender somewhat interchangeably but many of the anti-trans groups argue a fundamental difference between sex and gender. One you can change (and therefore doesn’t exist – gender critical terminology) the other you cannot. This is not an article making that kind of case. The point is that the people being listened to make a very clear distinction and use the term “sex-based” as a ‘dog-whistle’. There is little doubt that Liz Truss is not aware of the terminology she uses. The concern is that she adopts the same viewpoint as these anti-trans groups and subscribes to the narrative that men are a threat to women so women need single-sex spaces, trans women are not women but men and that they are therefore a threat and should be excluded based upon birth sex. To quote another article: “Liz Truss isn’t daft. She’s an experienced minister and policy wonk (she used to run a think tank…) who can master a brief.” Liz Truss knows the difference between using “sex” and “gender” and has carefully chosen her wording. Her “justification” for the exclusion of trans women has been set out – “protection of single-sex spaces”.

The final point: “Finally – which is not a direct issue concerning the Gender Recognition Act but is relevant – making sure that the under-18s are protected from decisions that they could make, that are irreversible in the future.” This is a contentious issue between affirmative and protective approaches. Proposals for amendments to the Gender Recognition Act were to potentially extend the legislation to included 16-17-year-olds. The affirmative approach has been adopted in law regarding abortion and even marriage. Granted marriage is fairly easy to reverse through divorce but an abortion is a permanent decision, one that a mother should and does have autonomy over even at 16. Does a 16-year-old trans person not have the ability to make their own decision over their future? No permanent changes occur until after 18 currently anyway. A protective approach is handing the decision to someone else with their own agenda. I would hope that most parents have their child’s best interests at heart, but what if those interests do not align with a parent’s views? How many trans readers have heard “it’s just a phase, you’ll grow out of it”? The underlying issue here is not protection from irreversible decisions, but making a value judgement on the autonomy of young people. The concerning issue here is that it is far more preferable to cause distress to countless young trans people rather than have one cis (non-trans) young person make a “poor” choice. It essentially values a cis person over a trans person. To quote the same article as above “the cabinet minister responsible for trans policy has decided to enter the debate about trans children, and to take a side…”. The same article continues, “…and to take a side, by questioning the prevailing orthodoxy that has been constructed by campaign groups and some clinicians.” The campaign groups and clinicians this article sneers at are those in the know. Evidence has informed their opinions rather than emotion and our equalities minister has chosen to ignore it. A minister who ignores her brief and her duty to protect minorities in favour of her personal opinion and pleasing her allies is something we should all be deeply concerned about.

Charlotte is an award-winning advocate for diversity and inclusion within STEM and the veterinary profession. She has sat on the Athena SWAN committee at Glasgow, spoken at public events and volunteered for several LGBT+ in STEM and LGBT+ inclusion in sport organisations, including LEAP Sports where she founded Seahorses Swimming Club. Charlotte holds a PhD. in veterinary science and was appointed as a teaching fellow in preclinical sciences and veterinary education at University of Surrey in 2019 to combine her extensive knowledge of physiology with her clinical practical knowledge to help provide a comprehensive and well-rounded experience for Surrey vet students.