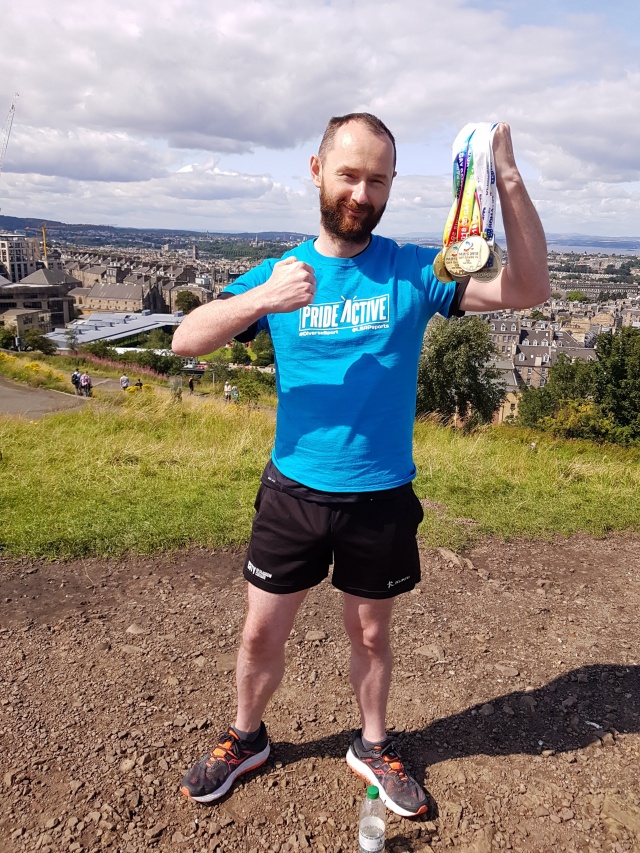 I think now it’s a lot more inclusive in schools and educational bodies, teachers, whoever it is involved in keeping physical education going in schools, recognises that people who drop out of PE in school or their interest changes might be for certain reasons and those reasons might be due to the emerging sexuality or consciousness of that.

Sport is a bad word to some people but we’ve got to be active as people. I think there’s a hunger for that and I can see that in groups that I’ve helped set up and establish which is a volleyball session in Glasgow on a weekly basis and a basketball session on a weekly basis, both sessions are free. The pickup and uptake of that has been excellent, I think people when they know about what we’re doing they want to take part.

I think it’s easy to feel intimidate if you’re in a hall or a facility where suddenly you see a team all together who do look fit, in shape and largely heterosexual- there's no doubt in my mind that my confidence diminished upon those situations. It can be difficult to keep your own sense of confidence and belief in yourself but you’ve got to, that’s what sport is, to be able to perform under pressure but also about letting go off all that and learning from each other. 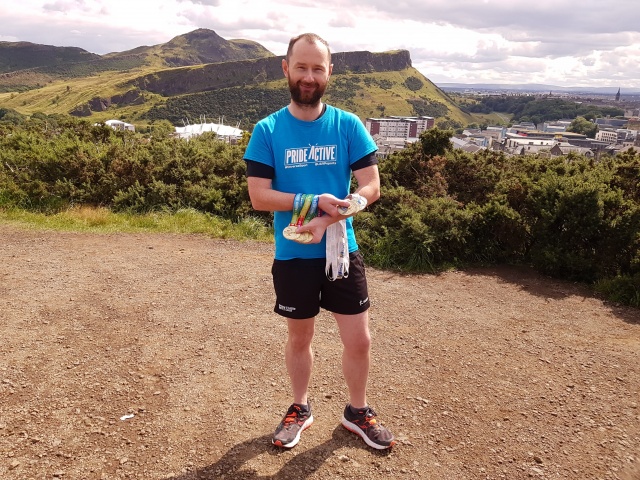 My experience of sport would be that I hate confrontation and I’m not good with noise but I always loved watching tennis, seeing the ball, play tennis on the street and against the ball myself on holidays if there was nobody else to play. Sport helps me to be part of a community in Glasgow, Scotland and Europe with the Gay Games and Euro Games with the work of LEAP Sports Scotland and to be able to be the leader of an LGBT sports session itself and the creator of a walking group that encourages people to be active. I feel part of the LGBTQI+ track and field family who have been at the Gay Games 2018, have just come from Rome at the Euro Games 2019 and look forward to competing at Dusseldorf 2020, we’re all sort of in contact with each other its lovely. I still recall vividly running the first time running around a track in particular the 200 and 400 which is the ones I really access at now and enjoy. I think being part of LGBT sport is the bit that has been missing for me and now it isn’t missing

Do you ever get to ask your average gay what they were like as teenagers at school and why many of us probably gave up sport? We kind of did but maybe didn’t know consciously why but there were reasons for us to stop doing sport or stop being good at stuff. I think the chaos that became in my life was then, you know create a lot of chaos round you and no one was maybe going to ask you “are you gay?” To say that in a high school was a lot harder to do than now. Society was largely homophobic thing; it was an encouraged thing in the late-80's.90’s to still have homophobia as the base for a lot our humour and attitudes. 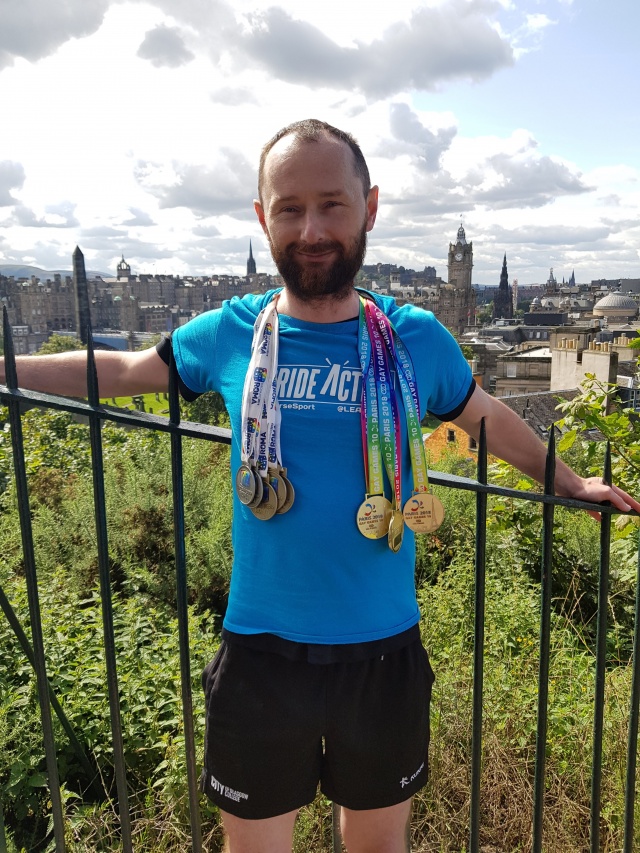 In what ways could we improve the experience of LGBTQ+ people in sport?

Visibility is key, some people might be getting sick of hearing things and sometimes people get done in with Pride asking how many Prides do we want or need? Every Pride readdresses there being a higher suicide rate among LGBTQI+ people, it is hard and true facts. That’s a community in crisis, in isolation.

The (LGBT) bars and clubs serve a purpose and they are a part of the community, they’re an anchor. However, if life is connected historically only by alcohol or drugs or a social recreational scene that was hedonistic then it doesn’t always serve an actual purpose. It can be quite individualistic and quite full of cliques; people can feel pushed out.

Whereas as a sport you would like to think and hope that sport, by creating it from scratch always has opportunities for beginners and new opportunities. We can’t just wipe a slate with society and say “that’s great now, everybody’s great with LGBTQI+”. There’s still stigma, there’s still shame and guilt. I’m a part of a generation that has stigma, shame and guilt and has had challengers, we look to ourselves to do what we can for the future to help people. 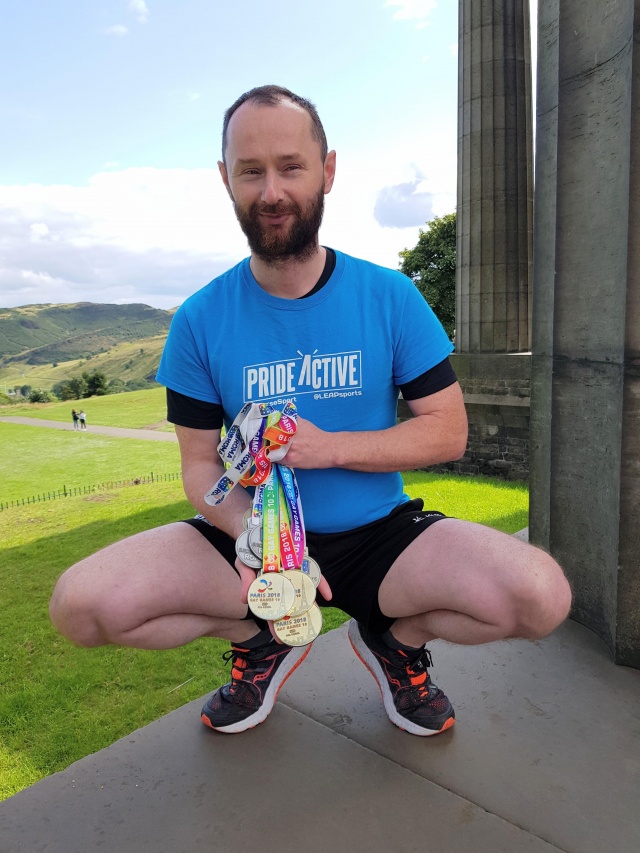 Now I really smile and I like seeing the word sport. I think it looks super sexy and trendy. I recognise it’s a barrier word for a lot of people. But I like to think there’s a generation that doesn’t have to not take part.

(Sport) is about not giving in. I have a sort of devil/angel situation, a sort of self-sabotage creature that I have to battle with that stops me from doing things. I just love the idea that someone could then say “sporty Bill.” You know I’ve been out on the scene doing a bit of promotion and a drag queen says: “and over there in the corner is sporty Bill, he’s got the leaflets if you want to talk to him.” You think oh yeah, I’m sporty Bill, not like chain-smoking, heaving drinking, failure Bill. It’s this guy that lights up rooms or organisations and meets people.

You can make sport yours. Sport doesn’t exist to be homophobic, so what’s come along in the past 20 years across Europe and in a big way in Scotland people are saying no we can be LGBTQI+ and take part in sport, we can make it ours. We’re not just destined to only be in bars in clubs. It doesn’t always have to be sport vs that option. 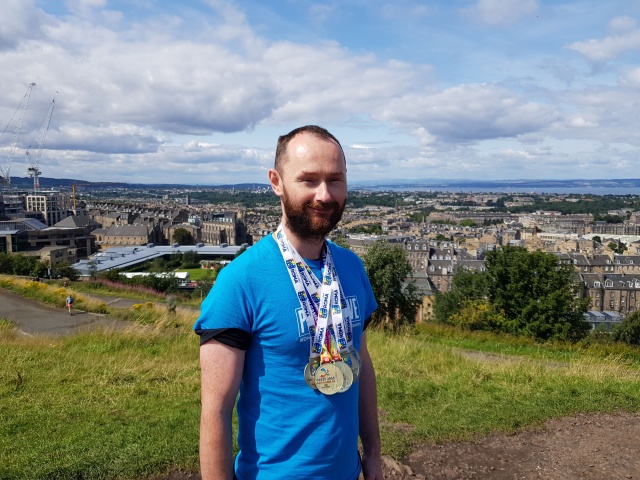 How has sport improved over the generations for LGBTQ+ people in sport?

Visibility of organisations or  LGBTQI+ specific groups and organisations such as LEAP and Pride Sports and the groups like Football v Homophobia existing. Groups and organisations that have the possibility to exists for participation in large scale events like Eurogames and Gay Games all beginning within my life time give an opportunity to connect with others internationally and work towards a goal. Sport is a possibility in many peoples lives now when it may not have been due to fear of the unknown and exposure and perceived negative reactions. In 2019 role models and organisations exist Internationally to encourage and promote, support, sustain and recognise the importance of sport participation for mental and physical well being of LGBTQI+ persons. In my formative years this was not evident. Homophobic comments were a society norm and I was acutely aware of the challenges Martina Navratalova and sadly Justin Fashanu faced.

What do you think is the future of LGBTQ+ people in sport?

I think it’s a huge future and one that exists very strongly in role models. People that are openly LGBTQI+ and performing their sport as a professional or carry on their sport within their communities at a recreational level. We forget this that we’ve got role models we all need, I still need a role model, what am I looking to do with my life in the next 40 years? If the suicides that happen tragically in our community are to do with people not knowing about their future and not understanding where they lie in our society or community, that’s tragic in itself. If that’s something to do with a lack of role models then you need to be the change that you could be and listen and support them.