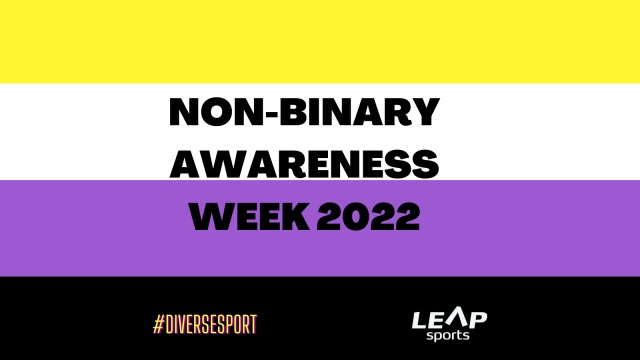 We welcome the publication of recommendations from the Working Group for Non-binary Equality formed by the Scottish Government to strengthen and improve equality for non-binary people in Scotland. This has been a huge piece of work and LEAP Sports wish to record our thanks to all those involved, especially those with lived experience who contributed to the work. This is a hugely important and groundbreaking set of recommendations which clearly articulates the inequalities experienced by non-binary people, and which has the potential to significantly improve people’s lives.

In their report, the working group considered a broad range of issues across three main themes of healthcare, data and law, and access to services, and made thirty-five recommendations for improvements. The Scottish Government have published their response to the report, which accepts nine of the recommendations in full, fifteen in part and eight to be considered further. There were two recommendations specifically relating to sport - one of these was partially accepted whilst the other was one of an overall three recommendations to be declined.

The working group recommended that the Scottish Government ’Agree key policy principles, underpinned by equality and human rights considerations, on how to improve participation in sport and leisure for trans and non-binary people’. This recommendation has been declined. LEAP Sports are disappointed by this decision, seeing this as a missed opportunity to underpin sport policymaking in Scotland with a clear and unambiguous equality and human rights basis, which we consider the UK’s Sports Councils guidance to have fallen short in doing.

The Group also recommended that the Scottish Government ‘Fund specific work to reduce barriers to trans and non-binary people's participation in sport’. This recommendation has been partially accepted with reference to the ongoing work of sportscotland. We are further disappointed by the limited acceptance of this recommendation, and we urge further clarity on specifically addressing the needs of non-binary participants within existing work. Additionally, we would encourage further discussions on how to ensure that existing work can be centred on realising ambitions of improving access and participation, recognising that work in this area often risks being focused on the development of policies with restrictive eligibility criteria.

Report And Recommendations of the Working Group on Non-Binary Equality