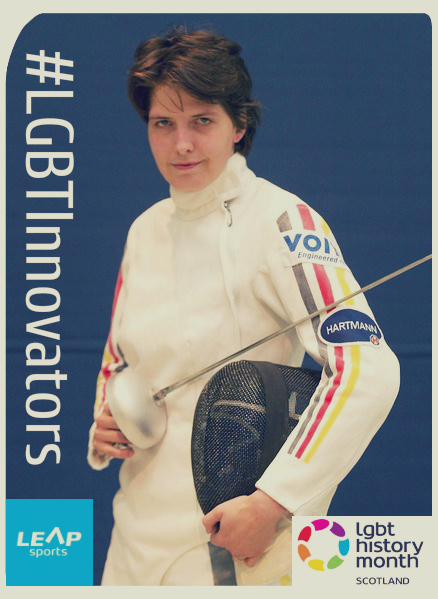 Mention her name in the world of Fencing and it is readily recognised. Imke is a world class fencer with a silver Olympic medal. She represented Germany at the 2004 Summer Olympics and won a silver medal in the épée fencing along with her teammates, Britta Heidemann and Claudia Bokel. Two years later in the 2006 World Fencing Championship, Imke won the bronze medal after beating Romania in the épée team event together with her team mates Claudia Bokel, Britta Heidemann and Marijana Markovic.

Imke is out lesbian and alongside fencing is known for her work speaking up for human rights in the sports world. She made it clear that she would boycott the Beijing opening ceremonies due to the Chinese actions in Tibet and Darfur. She was one of 40 athletes who signed an open letter to Chinese president Hu protesting human-rights violations in Tibet and Darfur.

Speaking about the importance of athletes using their position to progress human rights, she said:

“As the International Olympic Committee and other official sports organisations are not willing to support and to live up to their own principles, it is high time that we as athletes step in. We as athletes have the power to clarify: sport is much more than business! Sport has a responsibility towards society and should act as a role model for common values, including the full respect of human rights – in Russia and worldwide. We have to fight against discrimination, the destruction of natural resources for the construction of “playgrounds” for mega sports events, and inhuman working conditions. Let us stand up and defend the original Olympic values.” Imke Duplitzer