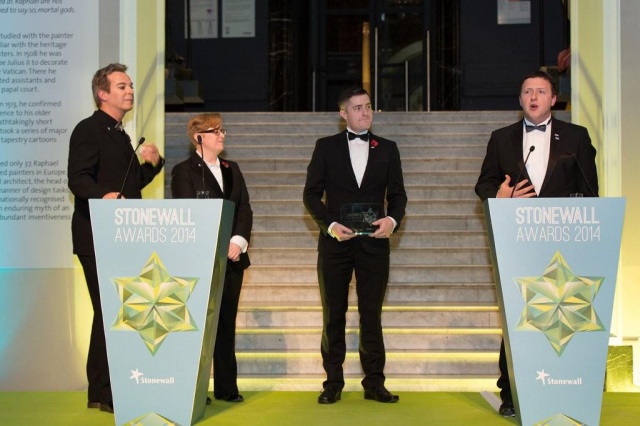 LEAP are the winners of the Sports Award at Stonewall UK Awards 2014. Pride House Glasgow ran for 14 days during the Commonwealth Games in Glasgow this summer, running more than 80 events with over 6,000 people visiting or participating, and playing host to a veritable who’s who from the world of politics, sport and entertainment, as well as visitors and dignitaries from across the Commonwealth and the world. On accepting the award, Hugh Torrance paid tribute to the volunteers and community supporters who made the project such a success. Torrance also thanked key funders, Big Lottery Fund Scotland and The Scottish Government, praising the work of the Scottish Government and singling out their ongoing commitment to human rights legislation.

The Pride House International movement has gone from strength to strength over the past 4 years, but Torrance urged attendees to get behind the movement, stating that ‘…future Pride Houses such as Rio 2016 and Russia 2018, are crucially important, but are likely to face far more significant challenges. Let’s ensure they are every bit as highly anticipated as Glasgow 2014.’ LEAP Sports were in good company as Scottish born journalist Liz MacKean took the Journalist of the Year award, whilst MSP Alex Neil made the shortlist for Politician of the Year.