No Drama, No Sport!

Do you know any Trans athletes?

No, there are not any Trans athletes!

Did you dream about becoming an olympian? And walking out into the stadium during the Olympic opening ceremony? And you didn’t have a chance?

If it’s yes, that means this blog is for you!

Many Transgender professional and amateur athletes are under pressure because of the different rules at different levels of the sport. For example at the start of March UCI changed their standards to be much higher, but only for the Trans women category. After a new rule was formed that is much stricter for Transgender women athletes, President David Lappartient said ‘’This is an important step in the inclusion of transgender athletes in elite sport.” In reality, this is one more step back from the inclusion of Transgender women in their Federations.

Let’s go back to the Olympic games!

Many of us didn’t have a chance to be professional athletes and to become Olympians. Don’t worry you still have an amazing chance to be part of two different events which are similar to the Olympic games! Have you heard of the Gay Games or Euro Games?

I’m sorry I didn’t introduce myself. I’m Tina and I come from beautiful Slovenia, Ljubljana. I knew that something wasn’t right probably at the start of my primary school but I realised in the second half of primary school ‘’what’s going on.’’ I was really scared about how other people would treat me, It was hard because I didn’t let them know and even harder in sports because I didn’t feel male and I could participate as a woman.

After high school, I started my transition and one of the worries was always sport. This was the part that I always liked but I didn’t know what to do. In the past, I had taken part in different types of training, football, table tennis, badminton, cycling- family, and after transitioning and completing high school I was only doing cycling for my soul. After around 4 years I came to the first badminton training at OIS NGO and I loved it immediately!

My friend who was organising badminton ‘’pushed’’ me much more to get involved in LGBT sport and because of him, I’ve registered with Gay Games. I was so scared because I didn’t know what to expect and this was my first LGBTIQ+ ‘’big’’ event. After half a year it was time to pack suitcases and go to Paris for an unforgettable adventure of my life!

This event exceeded all expectations that I had before going. As I’m a trans woman I didn’t know how it would go since I was participating in the women’s category. The second day after I came to Paris it was time for the Opening Ceremony.

It was exactly the same as the start of the Olympic games. For the first time, I could really feel the atmosphere, even before you came to the stadium. It was outstanding.

Then that was the moment!

And we came out into this big stadium like real Olympians. This was the moment that I will never forget, there were more than 10,000 people in the stadium and all were watching us. The next day, competition started. I was in the lowest category because I didn’t know how good I was. I started my competition in a group-round with so many nerves. After the first couple of points, I started enjoying it. In four of the five days of competition, I played on different levels: single women, doubles women, and mixed doubles.

On the last day, I realised that I will play in the final of the women’s c- category. This was totally unexpected for me. It was me against an Irish woman and I was nervous again and I didn’t start off the game well, it was a really tough game. The scores were really close and after two sets we were only two points apart. I’ve won silver and was happy. 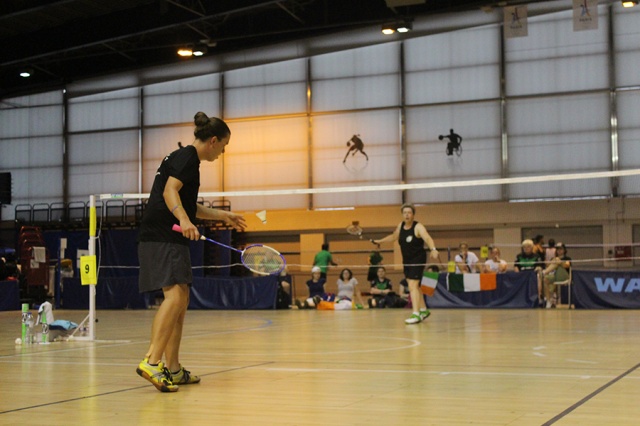 I can’t thank my friends enough, the Irish team and other supporters who were watching the game and cheering for both of us. It was my first real medal, and for me, unexpected! After the game, I went to the women’s changing room and after a couple of minutes another cis woman came in and I was a little worried about how she would react but it was really relaxing and nice and we talked about games and finally I went to the medal ceremony.

A year later I returned with my friends to Eurogames which were in Rome.

I played in a group, believe it or not, with the same player that I was playing in Paris. After both games, I realised that I didn’t only get experiences in playing badminton at competitions, but I even made new friends that I was meeting in different LGBTIQ+ sports projects.

If you are thinking you want to join this year or the next, EuroGames in 2020 will be held in Düsseldorf (Germany) and in 2021 in Copenhagen (Denmark), and you don’t know if you are good enough. Don’t worry you are!

There are participants who are playing for the first time and there are those who are professionals. There are many levels of competition in every single sport!

To the trans community, be who you are and open yourself up to opportunities like the Gay Games and Euro Games. You won’t regret it!

See you next Eurogames in Dusseldorf 2020 or Copenhagen 2021! 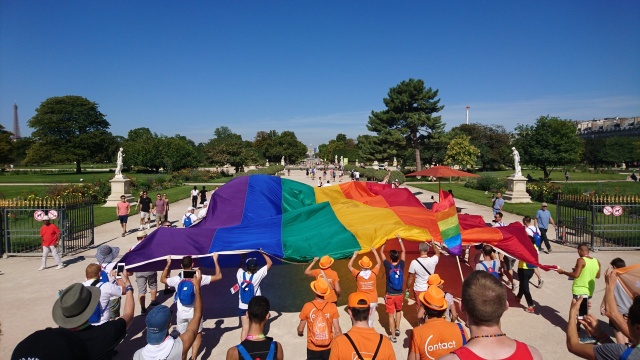